Woodbury Heights was incorporated on May 25, 1915 when Borough Council was formed with the first Mayor Harold Buzby. The area was first developed in the year 1771. Many of the older homes can still be seen in the area. One house that was built in 1771 is at 407 Oak Avenue. This house was used during the Civil War and is on the National Historic Registry.

In 1892 six businessmen from the areas of Philadelphia and Camden formed the Land Title Company. They bought land west of the town railroad from Deptford Township. They were- John Mayhew, E.R.Artman, Judge Pancoast, Howard M. Cooper, William Moland and I.W. Wilson. They laid out all the streets, built homes, and a community hall in 1894. 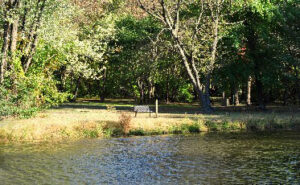 Simon M. Snook and Robert S. Shunk bought 185 acres of land east of the railroad in 1906. They built houses and sold land for $50.00 per lot. Mr. Snook built a lumber mill on Walnut Avenue, using waterpower by damming the lake. The mill later became a general store, which is now gone. Mr. Snook donated the lake to the Borough. The lake was called Glen Lake or Glen Terrace Lake and was used for swimming and recreation for many years. At this time it is no longer used for swimming, but it still remains one of our most popular recreation areas in town.

The first school was built in 1911, but condemned in 1924. The Woodbury Heights Elementary School on Academy Avenue was built in 1925 and an addition was added in 1962. A fire occurred in July of 1966 in the old section that was later rebuilt and in use today for kindergarten through sixth grade.

Gateway Regional High School, located on Tanyard Road in Woodbury Heights, was built in 1963. It has four sending district towns; Woodbury Heights, Wenonah, Westville, and National Park. As of the year 2004 additions and upgrades were started. The athletic fields are still being completed. Gateway is also a middle school for seventh and eighth grades.

In the year 1960 Woodbury Heights began developing sections known as Southwood West, Southwood East, and the Summit. In 1980 homes were built near the lake on Glenwood Court and Boundary Line Road. Further development occurred on Second Street and Maple Avenue, condominiums on Glassboro Road, and finally Spruce Court near the New Jersey Turnpike.

Woodbury Heights had a wealth of richness in the community of agricultural and small businesses like floral culture, toy trains, cigar makings, and growing pumpkins for Horn and Hardart of Philadelphia.

The seal for the Borough of Woodbury Heights was designed in the year 2000 by Alec Ferrell, who was a resident ninth grade student. The symbols represent; a scale of justice, a shield for safety through the police and fire department, the LT and VI stand for the six businessmen who formed the Land Title Company that purchased the land to start Woodbury Heights, two hands shaking show relationship of the Borough and Community, book and pencil for education, scroll for incorporation of the town in 1915, Behind the scroll is a blossom of an English Hawthorne tree (there were so many of these trees in the ravine, the name Hawthorne was at one time considered for the town name), land lines coming from the center symbolize the Borough’s outreach to the community.